Why Focusing on Process Over Outcome Predicates Startup Success

Why Focusing on Process Over Outcome Predicates Startup Success

Since launching in 2009, SmartyPants Vitamins has created five, first of their kind all-in-one gummy vitamins, secured distribution with thousands of national retailers, and provided 1.6 million vitamin grants for children in need through their partnership with Vitamin Angels.

Despite charting a new path for the broken vitamins industry, SmartyPants Co-founder, and Co-CEO Courtney Nichols Gould is less focused on the company’s outcomes than she is the team that’s making them happen.

Reflecting on her early days as a leader, Courtney discusses how fear and insecurity blinded her from her true duty leading her team.

“I was still afraid of my own ignorance,” she says. “You can’t be a good leader when you are so focused on the outcome. You end up not paying attention to the person in front of you…It becomes about meeting your goals, making your investors happy, and not getting fired. It’s a very different way of being.”

Today, her highest priority is that her 30 person team acknowledges and celebrates the milestones they’ve reached so far.

“I’m much more interested in the process, and that makes me a better leader. I see and listen to the person sitting in front of me,” she says.

In today’s featured interview, Courtney outlines the five strategies she utilizes to democratize the team’s decision-making process and how they empower each member of the team to further the SmartyPants’ mission.

Internally demonstrating why and how your company exists in the world starts the moment an individual joins your team. This makes a thorough onboarding process a non-negotiable for startups.

“It has to be a real discipline and priority when you’re growing fast that new team members are thoughtfully integrated into your culture and understand how your mission influences their work,” Courtney declares.

Clearly establishing your values – SmartyPants’ are transparency, transformation, and excellence – lays a strong foundation for new hires to understand how decisions are made at the company.

“A lot of companies paint their values on the walls when the real purpose of them is to guide the little decisions you make that nobody sees. It’s the little things that collectively inform your culture.”

You build a culture over time. You don’t say the words, and suddenly they mean something.

Each member of your team will be placed in challenging dichotomies daily. You want them to have a North Star to streamline those decisions.

“It’s really important that you have an anchor to motivate you when things get really hard,” Courtney explains. “In every startup, they’re going to get really hard.”

It’s in the hard moments that your core values really serve you.

During SmartyPants’ early days, there was a Vitamin E shortage that required the company to temporarily use a synthetic vitamin in place of their bioavailable one.

Instead of making an internal decision, they reached out to their customers, explained the situation, and asked for their feedback: Did they want synthetic Vitamin E to be added to their gummies? Or, did they want to remove it until the bioavailable version returned?

“When you’re a startup it’s very scary because every customer counts. But, we all fail when we try to act perfectly,” Courtney says.

Despite only 1% of SmartyPants customers being likely to notice the small change, the team opted for honesty and vulnerability versus taking the easy way out.

“People understand what it’s like to start a business. They know you’re faced with challenging decisions and don’t expect you to be perfect. Reaching out and communicating with your customers builds trust. They know the options you have when you make a hard decision and that it’s up to them to decide if it’s right for them. No matter what they decide, they still trust you as a brand.”

Whether you have 10 or 10 million, every customer deserves your respect.

These are the situations when your core values shine through. When they’re deeply ingrained in company culture, your team members hold each other accountable to themselves, the team, and your customers.

At SmartyPants, “team members guide each other, especially new hires, on the ‘SmartyPants Way.’ They practice it in the decisions they make every day,” Courtney shares.

With over two decades of startup leadership, Courtney “loves complex problems, particularly ones with a lot of obstacles.”

“The more complex they are, the more information you have to go through with your team,” she says.

“The magic sauce of entrepreneurship is sitting in a room with a whiteboard and a group of really smart people who are coming at a problem from very different places.”

At SmartyPants, decisions are made collectively and methodically by the team. Whether you’re a new assistant or the CTO, everyone’s opinion is welcomed, heard, and valued in team meetings.

To start, they whiteboard all of their ideas, select the top three and let their thoughts marinate for at least 24 hours before reconvening.

Next, a small group researches new issues that arose and reports back to the team who spends a few more days (generally a weekend) thoughtfully considering the approach.

A final meeting is held on Monday morning when the team assesses their approach and does a final gut check.

Before making the final decision, Courtney evaluates the idea against four questions to ensure that she’s serving all of the individuals who deserve her respect and consideration.

If everyone who takes SmartyPants could be in the room with me what would they want to see me do?

The final question is her main directive steering the company’s roadmap. The goal is that if all of the team’s decisions were published on the front page of The New York Times, they’d be confident in their convictions.

Be an Editor, Not a Writer

While SmartyPants makes a majority of decisions as a company, all team members are actively encouraged to explore new opportunities and make on the ground decisions; With the company’s values deeply ingrained in them, they’re fully equipped to do so.

The key, Courtney asserts, is to let them.

When you empower your team to champion new projects, it’s important to respect them enough to let them truly own them. Freedom to generate and share ideas stimulates creativity. Editing too early can stifle flow and openness.

To promote autonomy while demonstrating unwavering support, Courtney remains quiet during the first 20 minutes of a meeting before adding her perspective.

This is particularly important for leaders like Courtney, who have a strong personality.

“I’m a very intense person,” she says. “I occur in a big way. I have to be very accountable to that. Someone yelling is like me whispering. That’s something I’ve learned as a leader: You have to know how you occur in the world and modulate based on that.” 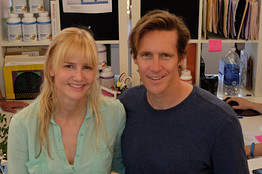 Learning when to step back, especially during the early days, is a challenge all leaders face. Courtney relies on advice from her husband and Co-Founder Gordon Gould that: “Not everything needs or benefits from your attention all of the time.”

To re-emphasize your role as an editor, you want to let your team members generate ideas on their own, providing feedback only when necessary.

“It’s about discerning whether you are actually making a positive contribution to someone or if you’re trying to satisfy your need to control everything,” Courtney says.

For example, if a team member is completing a task in a different style than you would but yielding the same result “you’re managing something that you don’t need to manage. As long as it’s working, why is your way any better?”

Ingrain Recognition into Your Process

The next critical step of inspiring a team of initiators is celebrating their contributions.

SmartyPants recently instituted Gratitude Fridays to ensure that everyone on the team has a clear understanding of their colleagues work.

Every week a team member is randomly selected to share his or her daily responsibilities as well as what they love and despise about their job. They’re also awarded a gift certificate from the management team as a small way to recognize their contributions.

According to Courtney, you have to invest time and energy in ensuring that your team operates like a cohesive unit, rather than in departmental silos.

“When you’re growing this fast, not everything is going to go flawlessly. It can be very easy to put the blame on someone else when you don’t know the challenges, stresses, and worries they’re facing. Knowing that a person is trying is hard as you enables you to approach a challenge with empathy rather than seeing them as an obstacle to achieving your goals.”

When you don’t know what people are facing in their lives you forget that they’re human.

Be Their Biggest Fan

As important as it is to foster a true sense of camaraderie on your team, as a leader you want to spend time letting individuals know that you’re personally there to support them.

Transformation is one of SmartyPants’ core values. They practice it by individually developing their team members.

Every year, Courtney and the members of her leadership team sit down with every SmartyPants team member and ask them what they want to work on for the next four quarters and how the company can help.

“We ask them: What would really push your boundaries and help you get to the next level in terms of who you are as a person?”

“That’s the most thrilling part of being a leader,” she says. “I want to make sure that every person who comes to work here leaves feeling like they changed for the better. They took on something that has always held them back, worked on it, and transformed it.”

“No matter what happens to SmartyPants, there are people in the world who have more skills and tools to live a better life. You can’t take that away. It’s the reason that SmartyPants is such an invigorating place to work. People are lit up here. We have very high standards but people know: We are just as committed to them as we are to the company as a whole.”

What Love Makes Possible
The Distinguishing Characteristic of Elite Leaders
Login to 33Voices
Reset Password
Enter the username or e-mail you used in your profile. A password reset link will be sent to you by email.